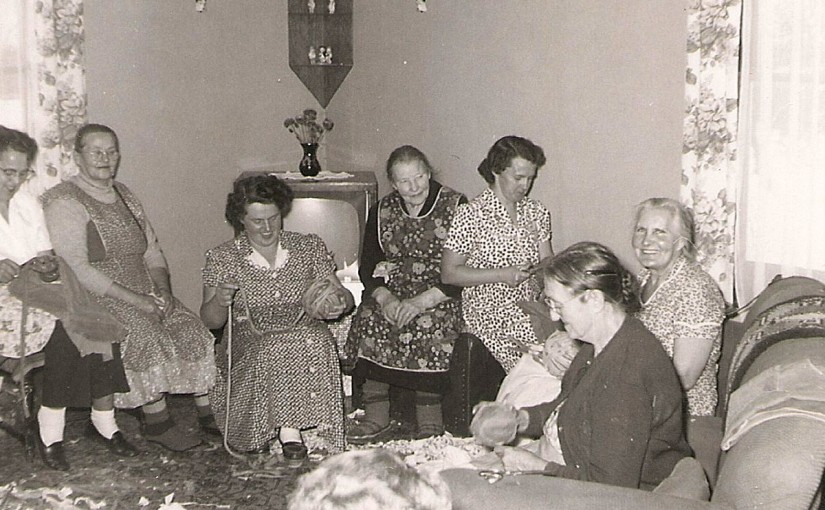 Like many Finnish-American families living in the U.P., the Puotinen women wove rag rugs on the family loom. According to Yvonne R. Lockwood, Finnish American weavers were prevalent in the U.P., especially the western U.P. where the Puotinen Farm was located. For her ethnographic study in Finnish American Rag Rugs: Art, Tradition and Ethnic Continuity, she met with and interviewed over 100 weavers who were first, second and third generation Finns living in the U.P.. She explored how these weavers used rag rug weaving to maintain and pass on their Finnish heritage.

In reading this book, I was pleased to find the following description of the therapeutic qualities of weaving:

Weaving restores a sense of order and control in times of despair. There is nothing quite as satisfying as pounding a rug to relieve frustration and anger (Lockwood, 171).

Yes! Just like Grandma Ines, banging on her loom.

The first weaver at the Puotinen Farm was Johanna. When Ines married into the family in 1940, she helped Johanna by setting up the warp and by gathering with other family members and friends to pull apart old clothes and cut up strips of cloth for the weft at rag cutting bees. Later, when Johanna got sick, Ines began weaving and banging on the loom, with the help of Kully. She wove rugs for many Amasa community members. She stopped weaving in the 1960s when she got a job working for a gas company in Crystal Falls.

I do remember the rag rugs at the Farm. They covered the steep creaky stairs and were held down with thin metal bars where each step met the next. There is no way you could’ve safely navigated those stairs without them as they would have been way too slippery. I don’t think there were any in the kitchen but all the main rooms had them on the floors too. They were made up of many colors, ranging from cream to blue to orange to tan. Mainly primary colors, never pastels but not jewel tones either.

Although Judy had been “actively interested” in weaving for over twenty-five years, she never witnessed Johanna, Ines, or any family or community member weaving on the family loom. Unlike many weavers who learned through watching and helping older family members, Judy became a weaver by returning to school in the late 1990s. She earned a BFA in fiber arts, with an emphasis in weaving. She did not weave rag rugs or use the family loom, a four harness Union loom from the 1920s. Instead she wove cloth on a new, eight-harness Schacht floor loom.

In the years just before the Farm was sold (2004) and Judy was diagnosed with pancreatic cancer (2005), she became an accomplished fiber artist. She hoped to have an art studio at the Farm, where she could get the family loom working again and do other fiber/surface design work. It never happened. She died in 2009. Her loom was donated to Finlandia University (formerly Suomi College), where she had earned her BFA in 2000.

Thinking back on my mom’s talent as an artist, I am angry. She died too soon. She was just starting a new life as a fiber artist. I am also sad for myself, my sisters and our kids. We lost such an amazing source of wisdom.  My daughter Rosemary Judith, would have loved to learn how to weave from her Nana.

I am not a weaver of cloth or of rugs. But I do weave words, memories and story fragments. In this way, I am imagining myself as honoring the tradition of Puotinen women weavers. Am I continuing the weaving tradition? I am not sure. My hope is that by remembering it through storytelling I can inspire others, like my daughter Rosie, or nieces Isabel, Sylvia or April, to explore weaving.